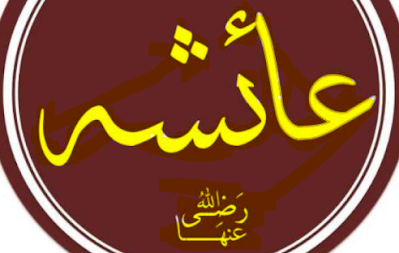 Hazrat Ayesha Siddiqah (RA) is the liver of Hazrat Abu Bakr Siddiq (RA), the first caliph. In an environment where even his own had become non-existent and had become enemies of the soul, he gave practical proof of his devotion to the footsteps of the two world leaders and being a sincere believer and then spent his whole life outside the walls of his beloved’s guard house. Allah (swt) was the companion of the Holy Prophet (sws) while Hazrat Ayesha (sws) was the perfect example of sincerity and love for her dear husband.

Tradition has it that before the marriage, the Prophet (peace and blessings of Allaah be upon him) saw in a dream that an angel was wrapping him in a silk cloth and offering him something. He asked, “What is this?” The answer was, “Did you open your wife?” She was Hazrat Ayesha.

Umar ibn al-‘Aas (may Allah be pleased with him) once asked the Prophet (peace and blessings of Allah be upon him) who he loved the most in the world. He said, “Aisha.” He said, “O Messenger of Allah, I asked about men.” He said, “To Ayesha’s father.”

One day Hazrat Umar (RA) told his daughter Hazrat Hafsa (RA) not to compete with Hazrat Ayesha (RA) because she is beloved by the Holy Prophet (PBUH). He once said that he was very perfect among men but Maryam Bint Imran and Asiya, the wife of Pharaoh, were not perfect, and Ayesha is as superior to women as Thareed is to all foods.

Umm Al-Mu’minin once said to Hazrat Umm Salma, “Umm Salma, do not bother me in the case of Ayesha, because no revelation has been revealed to me in the quilt of any other wife except Ayesha.” It was known that you used to suck the same bone that Hazrat Ayesha (RA) used to suck, and you used to drink from the cup where you used to put your mouth.

Once an Iranian neighbor invited you and you said that Ayesha will be there too. He said no, I would not accept it even if it was said. The host came again and then the same question and answer came and he went back for the third time and said Ayesha. Is he also invited? He said, “Yes.” After that he and Hazrat Ayesha went to his house.

With the blessings of Hazrat Ayesha (RA), the ummah is commanded to perform tayammum and the revelation of the verses of the Holy Qur’an on her purity is a clear sign of her exaltation and exaltation in the sight of Allah Almighty.

The life of a prophet is an ideal and role model for every aspect of the life of the people of the ummah. He needs Allah Almighty and a prophet, but he is also the role of a husband, so the role should also be ideal. Therefore, Hazrat Ayesha and other wives Love and affection for the saints also teaches us how to deal with our families. On one occasion, he said, “The best of you is the one who is the best with his family and I am the best for my family.”

He said in one place that putting a morsel in the mouth of a wife has the root of charity. One of the main reasons for the increasing rate of divorce in our society is the incompetence and lack of knowledge about the rights of husband and wife.

Hazrat Ayesha (may Allah be pleased with her) spent some time in the company of the Holy Prophet (sws) which had a profound effect on her personality. Since her hujra was very close to the Prophet’s Mosque, she listened to and memorized all the sermons given to the Companions in the mosque. If there was any hesitation about something, you would console it when you visited the blessed room.

Hazrat Ayesha (RA) was very devout as well as very generous like her father and beloved Beloved. Jomal used to come to her and spend it on the poor, the needy and the helpless in the way of God. She was also an expert in housework. She did all the housework herself. She was an obedient and obedient wife and took care of the comfort of her famous husband in every matter.

Hazrat Ayesha (RA) passed away on the 17th of Ramadan in Madinah and was buried in the Janat al-Baqi cemetery in Madinah.